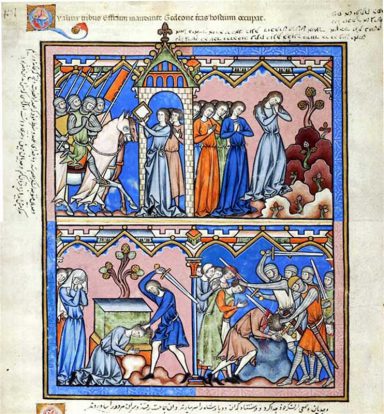 Women in the Book of Judges II

To index >
Unknown artist   -
Morgan Bible (M.638, fol. 013v 2): The story of Jephthah`s daughter
Three scenes from the story of Jephthah’s daughter:
a. Jephthah returns victorious from battle, riding a horse and followed by three armed soldiers. His daughter greets him with a square tambourine at the city’s portal, together with two attendants.
b. Jephthah’s daughter laments over her eternal virginity together with seven female companions, all clasp their hands and stand on a hill with tree and plants.
c. Jephthah`s daughter kneels before the altar with joined hands and her hair grasped by Jephthah, who raises a sword above her. Behind the daughter stand three lamenting women, one of which covers her eyes with a veil.