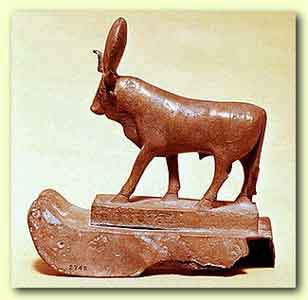 Of all the people of Israel`s backsliding during the course of their wanderings in the desert, the episode of the Golden Calf is the most serious. But a short time after receiving the Ten Commandments at Mount Sinai that stress the prohibition against idols and graven images, they demand of Aaron

Go make us gods which will go before us. Exodus 32:1

How can this lack of faith be explained? The text notes that the people’s demand came in the wake of the continuing absence of Moses – the leader, savior, legislator and prophet – who went up to the summit of Mount Sinai to receive the Torah. In other words, the people— although liberated from slavery in Egypt, were not yet free of their slave mentality—panicked at the loss of human and spiritual leadership. And therefore they seek emotional support based on patterns familiar from Egypt, known for its many gods, with their unique forms and countless idols.

Naturally, this episode served as the subject of many artists, because of the dramatic nature of the event and its description and because of its subject matter – tangible and physical description of the Divine. We must look at this artwork from two main perspectives:

How did the various artists understand this embarrassing incident?
What is the original meaning of the Golden Calf specifically and of idols in general?

The men saw that the women would not consent to give their earrings to their husbands. What did they do? Until that hour the earrings were (also) in their own ears, after the fashion of the Egyptians, and after the fashion of the Arabs. They broke off their earrings which were in their own ears, and they gave (them) to Aaron, as it is said, And all the people broke off the golden rings which were in their ears (Ex. 32: 8). "Which were in the ears of their wives" is not written here, but which were in their ears. Aaron found among the earrings one plate of gold upon which the Holy Name was written, and engraven thereon was the figure of a calf, and that (plate) alone did he cast into the fiery furnaces as it is said, So they gave it me and I cast it into the fire, and there came out this calf (ibid. 24). It is not written here, "And I cast them in," but And I cast it in the fire, and there came out this calf.

The calf came out lowing, and the Israelites saw it, and they went astray after it.