The Days of the Mishna and the Talmud

The earth is crammed with heaven.
Every bush is ablaze

with the glory of God.
Those who see take off

their shoes.
The rest sit around and pluck blackberries.
Elizabeth Barrett Browning

1 Now Moses was pasturing the flock of Jethro his father-in-law, the priest of Midian; and he led the flock to the west side of the wilderness and came to Horeb, the mountain of God.

2 The angel of the Lord appeared to him in a blazing fire from the midst of a bush; and he looked, and behold, the bush was burning with fire, yet the bush was not consumed.


3 So Moses said, “I must turn aside now and see this marvelous sight, why the bush is not burned up.”

4 When the Lord saw that he turned aside to look, God called to him from the midst of the bush and said, “Moses, Moses!” And he said, “Here I am.”


5 Then He said, “Do not come near here; remove your sandals from your feet, for the place on which you are standing is holy ground.”

6 He said also, “I am the God of your father, the God of Abraham, the God of Isaac, and the God of Jacob.” Then Moses hid his face, for he was afraid to look at God.
(Exodus 3) 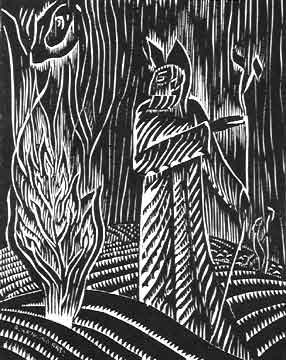 The story of the burning bush is the description of the call prophecy of Moses. It is Moses’ first encounter with God, and undoubtedly Moses experienced “the wholly Other”. In His revelation to Moses, God assigned him a mission of unmatched importance – saving the Jewish people from enslavement in Egypt. It is no wonder that Moses responded with anxiety, hesitation and reticence. Commentators from all periods, including artists, attempted to understand the experience Moses underwent and his responses to it. All saw Moses as an ideal type, but because the qualities of this ideal change from era to era and from one commentator to the next, each artist depicted Moses differently. We will focus here on the character of Moses in each portrayal of the story. In addition, we will attempt to examine how artists expressed the presence of God and how they chose to depict the burning bush.

The Days of the Mishna and the Talmud

At present, the oldest known painting of the burning bush is a mural from the synagogue of the ancient city of Dura Europos in Syria. This synagogue was built in the mid-third century CE by the local Jewish community, living on the edge of the Persian Empire; it was sealed and abandoned within just a few years. The time is the Talmudic period, a time when the ideal in Jewish society was the scholar and teacher. And indeed, in this painting Moses wears the Hellenistic teacher’s robe and teaches the story of the burning bush. Thus, the painting at one and the same time depicts Moses’ vision and Moses rabbenu, the wisest of all scholars, teaching us the weekly Torah portion. God is represented in this painting by a hand, also pointing to the burning bush. The teacher, Moses, is both God`s colleague and His disciple. 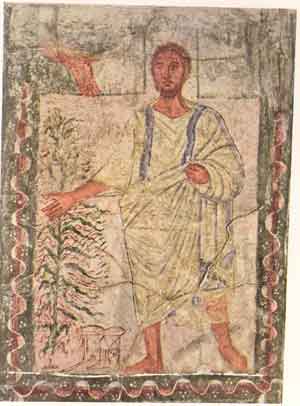 In Exodus 3:6-7 God proclaims to Moses the redemption of Israel from the slavery in Egypt. One question that arises regarding this astounding vision is whether there is any connection between the components of the vision of the burning bush and the content of its message? The people of Dura Europos apparently were acquainted with

Midrashim according to which the burning bush symbolizes the Jewish people and the fire symbolizes Egypt. In Midrash Shmot Raba, for example, regarding the words “from the midst of the bush” (Exodus 3:2), sages explain in various ways the meaning of a bush that is not consumed by fire: the common denominator of all is the promise that the people of Israel will survive and that it must believe in the coming redemption. Therefore the people of Dura understood the biblical story as relating to their own situation – in effect all the drawings in the synagogue express hope for the redemption of Israel, the return to the Land of Israel, the resumption of the Temple services and national freedom.

Another painting of the burning bush from a Jewish source is found in the Sarajevo Haggadah, a Passover haggadah illustrated in Spain in the 14th century. 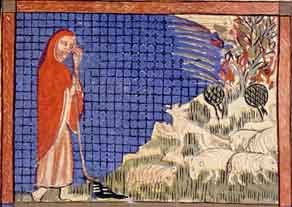 Unlike the healthy looking Moses in Dura, this Moses is skinny, introverted, ascetic. He does not point out the bush like the Moses in Dura, but instead hides his face and clutches his staff out of piety. But this Moses also looks at the bush, out of an intense desire to experience God. Although the text specifically explains

why Moses concealed his face, Midrash continues to deliberate on Moses` response. According to one opinion, there is in this concealment a flaw or failure to seize the critical moment of the encounter with God. According to another opinion, his concealment expresses fitting respect and Moses’ action later on earned him a unique reward – the revelation of God face-to-face. The Sarajevo Haggadah was created in the period when Jewish mysticism or `Kabbalah` was at is height, at the time when one of the fundamental Kabbalist texts, The Zohar, was written. Kabbalah deals primarily with encounters between special men (the mystics) and the Divine. The kabbalists saw in Moses and in the revelation he experienced at the burning bush a model for their actions; they considered the combination of Moses` piety and awe with his curiosity and daring as appropriate to their own exploration of “the Infinite.”

The next painting, drawn in 1613 by the Italian artist Domenico Feti, represents an inherently different world from that of the kabbalists. 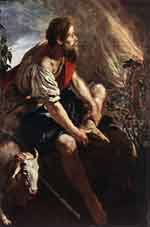 Like many other artists, Feti chose to depict Moses’ reaction (which is not specifically described in the biblical text) to the Divine commandment in Exodus 5:3:

Do not come near here; remove your sandals from your feet,
for the place on which you are standing is holy ground

The removal of shoes is mentioned in only one other place in the Scriptures, in the description of Joshua’s encounter with the commander of God’s army. In both cases, an angel of God appears and in both instances, the reason given for removing the shoes is that the place on which they are standing is holy ground. In Islam, as in other religions, approaching any holy site requires shoes to be removed, apparently in an effort to separate the holiness of the place from the profane and also as an expression of humbleness. In any case, Moses does what he is commanded, and even more. Unlike the painting in the Sarajevo Haggadah, Feti`s Moses does not conceal his face, but gazes openly at the wondrous sight. Although Moses turns toward the flames, it seems that he is also looking past the bush, perhaps out of intense curiosity and a desire to understand what is causing this wonder.

The ideal in Domenico Feti`s time is still today referred to as “the Renaissance man”: educated and active in many and varied fields of culture, science, politics and commerce. Moses` simultaneous fulfillment of the Divine command (action) and his intense gazing at the burning bush (study) express the Renaissance man’s involvement in a variety of areas. Comparison of these elements (action and study) as well as Moses’ physical appearance in Feti`s painting to the paintings from Dura Europus and the Sarajevo Haggadah highlights the difference in the perception of the ideal in each era and context. Feti’s Moses is not a respected teacher nor is he a humble kabbalist, rather he is a strong, active man thirsting for knowledge.

Finally, in a 1634 painting by the Spanish artist Francisco Collantes, we encounter the Catholic world of faith in the Baroque era. 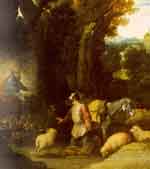 In this detail from a large landscape painting, Moses kneels, surrounded by his flock and his donkey, before the blurry image of God, depicted as a venerable old man hovering above the burning vegetation. Moses is dressed as a humble peasant, gesturing submissively. It seems that Collantes is depicting the text in Exodus 3:11: But Moses said to God, “Who am I, that I should go to Pharaoh, and that I should bring the sons of Israel out of Egypt?” Spanish artists in the Baroque era dealt frequently with the deep faith of their ideal figures, a faith that is not shaken even in times of trouble. This preoccupation is apparently related to the intense political and religious upheavals Spain experienced at that time. After many years as a leading empire in Europe, Spain’s status declined considerably in the 17th century, as a result of its unsuccessful clash with England and of the Reformation, whose cultural and religious innovation was felt mainly in northern European countries. Spain’s weakness posed a serious challenge to its Catholic faith. And therefore, Collantes apparently saw in the vision of the burning bush and the Divine promises made then to the people of Israel encouragement for the prevailing mood in his own time.

In summary: the burning bush episode describes Moses’ first encounter with God, the first time in his life when holiness penetrated into the secular world. The commentators and artists’ different approaches to the character of the ideal figure— Moses— are possible because the Bible does not go into detail in describing the event. Every artist, like every commentator, had to fill in the gaps in the biblical description. There are numerous opportunities here for employing imagination – to connect an event from the past with the present and to extend the use of symbolism. In other words, every painting is essentially a commentary.

Joshua 5:13-15
13 Now it came about when Joshua was by Jericho, that he lifted up his eyes and looked, and behold, a man was standing opposite him with his sword drawn in his hand, and Joshua went to him and said to him, Are you for us or for our adversaries? 14 He said, No; rather I indeed come now as captain of the host of the Lord. And Joshua fell on his face to the earth, and bowed down, and said to him, What has my lord to say to his servant? 15 The captain of the Lord’s host said to Joshua, Remove your sandals from your feet, for the place where you are standing is holy. And Joshua did so.